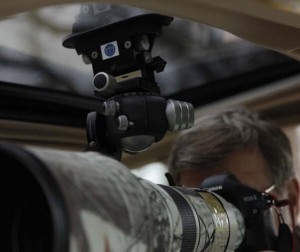 Vacu-Pod in action on inside sunroof

Developed in 2006 by Michael F. Corlew, a big-lens  photographer and bird watcher, to answer the special needs that arise when either weather or site conditions require that one stay close to his or her vehicle.

After nearly two years of trials and testing and changes, the original Vacu-Pod was released in early 2008. Profesional photographer Lewis Kemper, a Canon Explorer of Light, was involved in the testing from the beginning. Lewis would ask if changes could be made, I would go back to the drawing board to try to come up with a unit that would meet the original scope and add the new feature requested. One thing that we wanted was a unit that was easy to use, small enough to fit in a camera bag lens space, be lightweight, and be user friendly.

The orignal Vacu-Pod, I thought, did those things until Lewis came to me after a trip to Alaska, and asked if it would be possible to change from one position to the other without having to unscrew the camera mount and screw it on to the other position. I spoke with other users, some who were using the Vacu-Pod to support video cameras; the same request was made. So the need for the model was established.

Vacu-Pod in action on sunroof

Vacu-Pod Model II is designed and tested to attach to any smooth non-porous surface. If your vehicle has a sunroof, the Vacu-Pod Model II will attach to either the inside or outside surface, and will support your standard tripod head with camera and lens attached. See photos.

The new Vacu-Pod Model II, released in February 2010, is equipped with added tilt-top. This innovative feature allows for leveling your camera mount if Vacu-Pod Model II, is attached to an angled surface. The tilt-top has a full 180-degree range of motion. 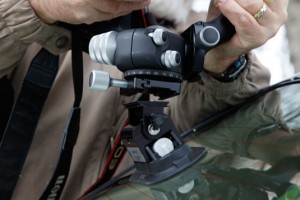 To use this feature, you will need to attach a quick-release clamp to the bottom of your camera mount (tripod head) and a specially designed Vacu-Pod Bar to the top of your tripod.

By using the quick-release feature you can move your camera mount from your tripod to the Vacu-Pod Model II very easily.

For those who use both still and video cameras, the use of this quick-release setup allows you to change complete camera and mount easily.